Sam turned 5 yesterday, and when I thought about writing this blog, I thought I’d be reflecting on everything that’s changed about him and life in the last five years, BUT then this weekend verged on panicky stress in myriad ways, so cowabunga it is, and it all started with the birthday party. 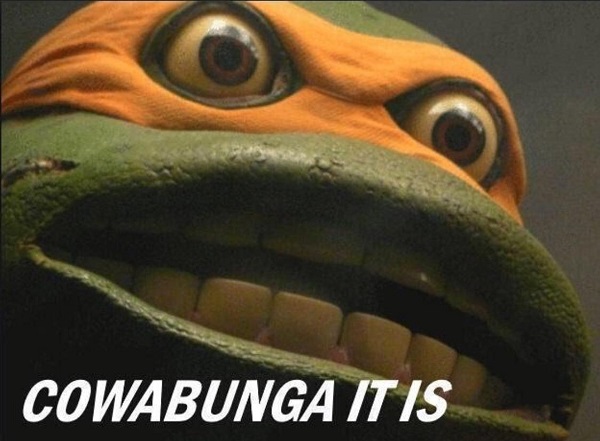 Sam requested a birthday party this year, which I’ve been expecting for a while. A lot of his friends have birthday parties annually, so I knew it was only a matter of time before he requested of his own. The trouble is that our house isn’t really… suited to parties? Kyle and I aren’t the “entertaining guests” types (have another couple over for a game of Cards Against Humanity? Absolutely. Have a bunch of people over? Hello, that’s my social anxiety sending me into the bathroom wheezing), so entertainment space wasn’t high on our list of priorities when we bought the house fiveish years ago. As a result, we’ve got kind of a pass through living room (which is a mess right now, because babies), our dining room houses all of Sam’s toys, our kitchen lacks counter space of any kind, and we have no parking.

So Sam having a party wasn’t quite as simple as I remember my birthday parties being when I was a kid–just some friends getting dropped off at my house for a couple of hours, eating cake, watching me open presents, and then playing with party favors in the backyard. We needed to find a different space to host the party and, after a lot of research and pricing, we settled on Sam’s favorite indoor playground at a local mall. The prices were entirely reasonable, and the party itself was a blast. Sam had such a great time, and I think all the other kids there did, too.

But the act of getting to and from the party, along with a brief incident during the party, almost had the whole thing spiraling into disaster.

We actually managed to get everyone dressed and out of the house in a timely manner, which is no small task when you’ve got one-year-old twins who are being taken out during naptime… and when you have to pack the car with baked goods and favors and everything related to partying. We were actually out of the driveway fifteen minutes early! A good omen, right?

Well… not quite, as it turned out. Kyle, who has an ear for this sort of thing, noticed that the van was making a rattling noise whenever we took a sharpish turn. The van is, I may have mentioned, a little over ten years old, and while it’s a Toyota (so the motor runs fantastic), it’s bound to have some issues at this age. Most of its issues thus far have been body or accident related (namely, the front driver’s side mirror got torn off by a tree branch, and one of the washer fluid dispensers somehow got turned around, so it now shoots sad little spurts of washer fluid all over the hood in a comically pathetic manner), but rattling is never a good sign.

So that was a pall over things, but I was in stressed out IT IS MY FIRSTBORN SON’S BIRTHDAY PARTY mom mode, so I informed Kyle on no uncertain terms that we were not to worry about the van until we left the party.

We got to the venue, we set up, and my parents arrived shortly thereafter to help out with everything, and shortly after that, guests started arriving. And it was a whirlwind and everything was going so well until! It was time to see if anyone wanted to get their face painted. With the help of some of the other moms, I rounded up the kids from the playground and found all of them… except SAM.

As it turned out, Sam had just sneaked into the bathroom without telling anyone and was spotted going in there by another dad. Kyle knocked on the door, Sam yelled at him that he was almost done leave me alone dad gawd, and crisis averted.

The rest of the party was great. Everyone enjoyed the baked goods, everyone sang happy birthday to Sam, everyone got to be pirates of some flavor, and then it was time to head home with babies barely conscious and Sam flopping all over me like a fish out of water. He was happy, beyond happy, but he was exhausted.

And, of course, the van was making rattling noises, so my parents agreed to follow us home on backroads (because it’s better to break down NOT on the state’s main thoroughfare), and we headed back, all of us in a kind of “well that was a lot” fugue. Once we returned to the house, Sam opened all of his birthday presents in a hyperactive flurry, dove into building his new Lego sets, and snuggled up in his new Stitch kirigumi, hours before bedtime. 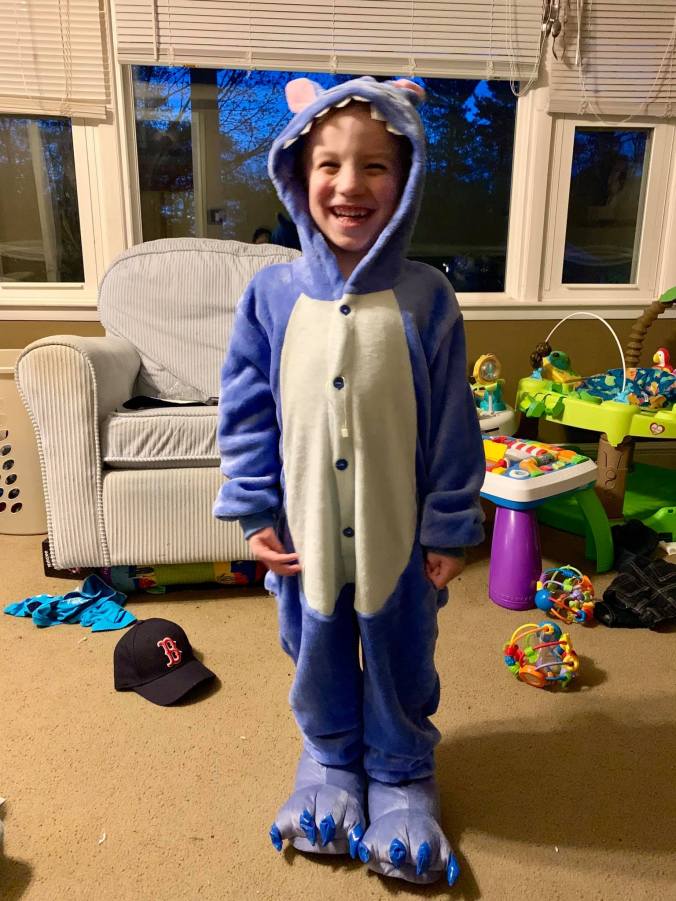 (this is adorable, but I am biased)

At bedtime, we brought the babies up first, and then started to go through Sam’s bedtime routine. This is where the third catastrophe struck because, you see, we couldn’t find Puppy.

Puppy has been Sam’s best companion since his first birthday, when Kat bought him as a gift, delighting in Puppy’s resemblance to Sam’s Nana’s dog Greta. Since then, Sam and Puppy have been inseparable as much as a boy and his stuffed dog can be. He counts Puppy as a member of the family, as his conscience, as the devil on his shoulder, as co-creator of the universe (his theology and science are a little spotty).

On Saturday, Sam insisted, as he usually does, that he bring Puppy in the car with him. We agreed, with the caveat that Puppy must stay in the car so he didn’t get lost.

Saturday night, as we went to tuck Sam in for bed, he asked us, “Where’s Puppy?” and we realized that we didn’t know. Nobody could recall seeing Puppy after we reached the mall, and nobody thought anything of it because we’d been hauling so much into the house, between baked goods, presents, and children, that a missing stuffed animal didn’t seem that much out of the ordinary. We figured that Puppy must’ve gotten caught up with the other presents, put somewhere he wasn’t usually, maybe even left in the car.

But repeated searches of both the house and the usual places in the car turned up empty. Sam slept heavily because he was so exhausted by the party, but told us in the morning that he missed Puppy very much.

The morning was, by the way, Mother’s Day. Kyle let me sleep as much as he could, which my body interpreted as “it’s the exact same time you usually get up, why aren’t you awake yet?” I came downstairs to receive all the children on my lap and to hear Kyle tell me that the remote control for the TV and cable had somehow gotten disconnected from the TV so that we had to adjust the volume manually.

All’s good. We hunted for Puppy some more, turned up nothing, watched Game of Thrones (long, exhausted sigh), tried to sleep. About halfway through the night, I blearily awoke to Sam trying to climb in bed with me and Kyle because he’d had a nightmare (according to him: Isaac was sick and had no legs or hands and Sam had no legs or hands so he couldn’t give Isaac his medicine). Our bed isn’t quite big enough to accommodate Sam right now (since he, being Kyle’s son, is extremely long), so we set up a nest for him right next to our bed and carried on with the night.

Monday morning dawned cold and rainy and Sam’s actual birthday. We still had no idea where Puppy was, and we had plans to bring Sam to Chuck E Cheese for this, his last birthday where he didn’t have to be in school. And that we did, and he had a blast, running from game to game and ride to ride until he was exhausted…

…but not quite exhausted enough that our attempt to put him to bed without Puppy was successful for the third time. Half an hour after we tucked him in, he shuffled downstairs, telling us that he absolutely could not sleep without Puppy anymore, not if he didn’t want to have nightmares. Kyle and I got up to do another thorough search of the house, though now we couldn’t search the van as well, since Kyle had dropped it off to get the rattling inspected.

We worked off Sam’s clues, including his insistence that he’d brought Puppy inside and tossed him the air a few times before bringing him upstairs. Those clues turned out to be duds, and we simply could not find that stuffed dog. The only thing that made Sam content enough to sleep was when I called Kyle and had him pretend to be Puppy and pretend to tell Sam that he was coming home soon. After that, Sam slept well, but Kyle and I were in a state.

Because on the one hand, there’s the cold reality that if your child brings their favorite lovey everywhere, the chances of it becoming a Lost Toy are extremely good. We know Sam didn’t bring Puppy out of the van at the mall, but that didn’t preclude the possibility of Puppy falling out of the van and nobody noticing. And on the one hand, there’s this harsh logos part of the brain that wants to say, “Well, now you know not to bring your toys everywhere so carelessly.”

I told that part of my brain to fuck off because, really, brain?

The other hand is, of course, the heartbreaking possibility of your baby’s favorite lovey being gone forever and how you’re supposed to help him cope with that. The internet, I have found, is not very much help for this issue, as most of the suggestions are along the lines of “buy an identical replacement!” And yeah, that was entirely possible until Toys R Us (the store Puppy came from) closed and FAO Schwarz (the manufacturer) revamped their husky puppies to look completely different.

In the end, we planned to use some mixture of our own storytelling capabilities and Toy Story lore, combined with Amazon’s new one day shipping (they are evil, but they get things here fast) to bring Sam a reasonable facsimile along with some story about how Puppy had to go away for a little bit so that he could grow up, just like Sammy was, and how he has a different face and looks cleaner but he’s still Sammy’s Puppy in his heart.

And, knowing Sam and how he is the world’s least bribable kid, and how he sees through literally every line of BS we sell him, it would fall flat and we’d have to go the cold world route, whether we wanted to or not.

Thankfully, though, the story has a happy ending. Kyle picked up the van this afternoon (diagnosis: power steering was cracked and leaking and the struts are starting to get wobbly) and dug through every corner of the thing for anything we missed. In his digging, he remembered that Sam likes to hide things in compartments and pockets and so opened the compartments on either side of Sam’s seat in the back. Sure enough, nestled into one of the compartments was our beloved wayward Puppy.

Sam’s reaction to seeing Puppy on Facetime was beautiful, and I won’t pretend it didn’t make me cry. Bedtime was much simpler and faster, and this weekend’s crises have all been put to bed.

But MAN, I am exhausted, emotionally and physically and mentally.

So. Happy birthday to my beautiful firstborn son. I hope we managed to keep the craziness of this weekend under wraps enough that it was a fantastic one for you. 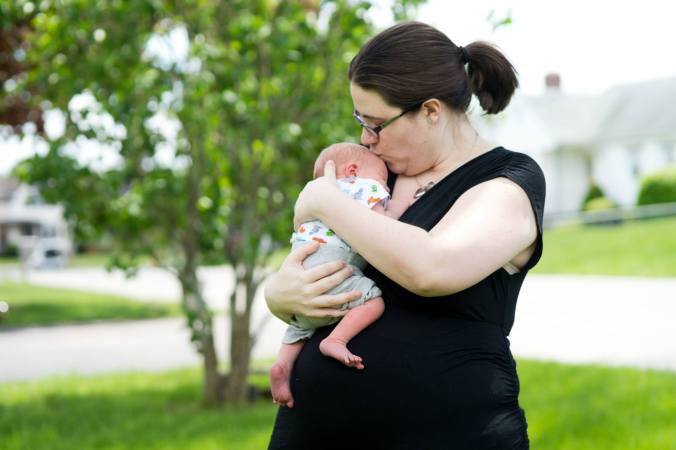