I think the overall moral of this story is that my cat is an asshole, but that’s getting ahead of myself.

Tinkerbell spent the night at Tufts Veterinary Clinic on Monday. They’re expensive (as noted), but they’re also the best around (and the closest emergency clinic to our house), so it wasn’t even a question for me. They gave her fluids and ran tests, and they even convinced her to eat a little food. The vet called me Tuesday morning and explained that the blood work had come back mostly normal, save for two small blips. One was a decreased platelet count, which is common in older cats; the other was elevated calcium levels, or hypercalcemia.

In her case, the hypercalcemia was what’s known as “idiopathic” or “lol we have no idea what’s going on here.” But she was doing a lot better yesterday, eating well and drinking well and overall bright and alert, so they saw no reason to keep her. I went and picked her up after work, with enormous thunderheads towering in my rearview mirror and classical music playing on the radio.

(I like to listen to classical music on my drive home; something about its smoothness helps me relax. On the contrary, though, I’m a Top 40 girl for the morning commute, particularly if I’m listening to Matty in the Morning)

So I picked her up, and because I’m softer than a melting marshmallow in May, I let her out of her carrier for the ride home. 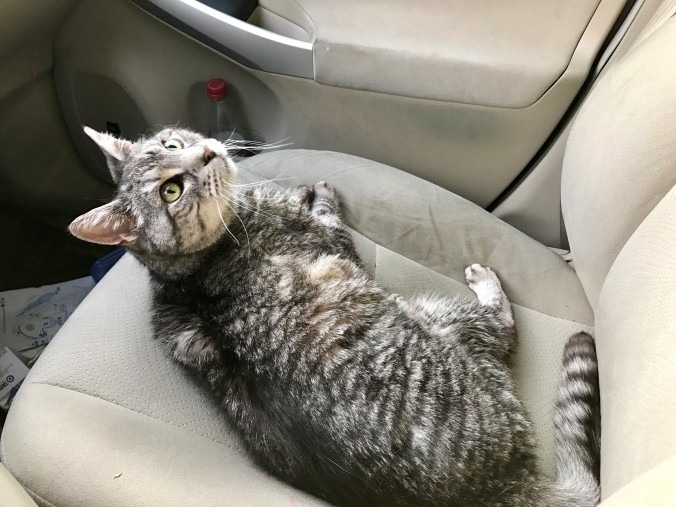 (my car is an absolute disaster area, pls ignore the mess on the floor)

She was surprisingly content with this arrangement. She spent most of the ride lounging on the front seat like the royalty she is, but for the first ten minutes, she rode on my lap, looking out the window over my arm. She tried to look on the dashboard, but found that was too unstable while the car was moving, and settled instead for poking around the passenger-side floor and, eventually, the backseat.

I picked her up out of the backseat when we got home, and she promptly peed all over me, protesting as she did so. Well, I can’t blame her. They gave her a lot of fluids, and she’d probably had to go for a while but been unable to communicate as much because she’s a cat and can’t talk.

(she sort of talks; she yowls, which she did when I picked her up… and then there was a lot of pee, which I assume humiliated her as much as it disgusted me)

Inside the house, she immediately started exploring everything, making sure it was all as she’d left it. She devoured a bowl of her new cat food (prescription stuff for hypercalcemic cats), chugged some water, pooped perfectly well (compared to what she’d been doing, which was not pooping at all), and then spent the evening lounging at the top of the stairs and showing off her cat boots. 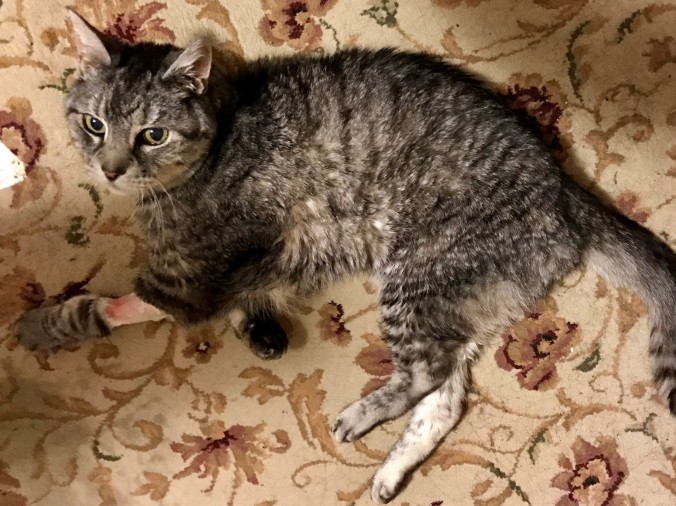 (things of note: her irritated expression at being photographed, the bruising from where they placed her IV, and my ugly ass carpet… I can’t wait until we can afford to tear it all out and replace it with hardwood)

So it’s all good news in her department. She’s an ornery, picky old lady, but she’s alive and well enough for her age. She has another vet appointment at her usual (significantly less expensive) clinic in about a month, so we’ll see how she does in the meantime. For now, though, she seems like she’s stubbornly sticking around for the long haul, and I’m very happy to see that.

There’s more good news as well. Because her issues weren’t anything severe, we recouped some of the cost of her stay at the clinic, about $600. As if that wasn’t awesome enough, Kat managed to organize a quick fundraiser, and many of our awesome friends donated a total of $700 to help us offset the costs. I’m in awe and so very grateful on so many levels. We’re still a little less financially ready for PGS than we were, but thanks to our friends and Tinkerbell not actually being sick, we’re not in as bad of a place as we were.

So I’m tired, but happy. It feels like this week has already taken a month, and it’s only Wednesday, but at least the back half of the week seems like it will be less stressful than the front half.