I’d had about 5000 different ideas for this blog–things like raising boys into good men and loving your kids no matter who they are and Steven Universe–so this entry kept getting put off and put off while I ruminated on a bajillion things.

(mostly I cried about Steven Universe)

Here’s where I make a guilty confession: I missed my flu shot this year. Between the twins and the insanity of the year as a whole, it just didn’t happen. The twins got their flu shots, but me? Nope.

So, of course, when I started having the fever and chills and aches and pains in addition to the nagging cough, I thought, “Oh great. My hubris has brought me low, for I have contracted the flu.”

My mother-in-law, knowing that we’re still stretched pretty thin, gave us some money for a copay so that Kyle and I could go see doctors, as he also had some flu-like grossness. My mom came and watched the kids, and on Friday, Kyle and I headed to our nearest urgent care clinic and donned masks while we waited to be seen. They registered us at the same time, which was a mistake (but I’ll get to that in a minute), and then they called us in to separate rooms.

Everything happened very fast in my room. The nurse asked me all sorts of questions and then asked if I was allergic to some medication I’d never heard of and if I was taking Prilosec. I kind of laughed and said no, that I was allergic to raspberries and taking Effexor. She seemed confused but noted it in my chart and tried to do a throat swab for a strep test, which took a couple of tries, as I kept gagging too much to let her get the swab past my tongue. Once she finally had that info, she vanished back down the hall and, fifteen minutes later, a nurse practitioner came in.

She spoke very quickly and, without doing a single test, remarked that it sounded like I had the flu. She wrote a prescription for some cough medicine, told me to get some rest, and sent me on my way. And that, it seemed, was that.

Down the hall and to the left, Kyle was having a very different experience. For one thing, the nurses kept asking if he was taking Effexor and if he was allergic to raspberries. For another, they’d mistakenly marked down his heart rate as being in the 200s, which resulted in a parade of fluids and a barrage of tests, even though when we’d come in, Kyle had felt much better than I had. He eventually sent a nurse out to fetch me from the waiting room so that I could sit in his exam room while he breathed on a nebulizer and then went to get chest X-rays. In the end, he got a diagnosis of bronchitis and prescriptions for cough medicine and an inhaler and all sorts of stomach soothing medication.

Total cost on Friday? $100 for everything, including copays and all of those medications. Yikes!

Kyle, after a day or two of breathing treatments, started to feel better; but I didn’t. In fact, I was feeling worse every day. I’d started taking NSAIDs at bedtime, which kept the fever at bay, but I found that I was having more and more trouble breathing and, what was weirder, I could hear a weird crackling sound when I laid down and tried to breathe normally. This happened two nights in a row, and finally today, Kyle said, “Okay, we’re going back to the doctor.”

So back we went. We waited for two hours before I got a room (still at urgent care, because like hell was I going to the ER–twice the wait and ten times the copay when I’m not dying? No thank you), and when I explained that I’d been there Friday and it had only gotten worse, the admitting nurse commented, “Well, just so you know, your lungs were clear on Friday.”

Anyway. They took my vitals and a new nurse practitioner came in. She looked just like a good friend of Kyle’s and mine, so I liked her instantly. She had a bedside manner that I really appreciated, explaining everything and going through all of the steps she was going to take, determined not to let me go home without a proper diagnosis and proper care. Half an hour, a nebulizer, and some chest X-rays later, Kyle and I headed back home, me with a fresh and fancy diagnosis of atypical pneumonia.

This isn’t my first rodeo with pneumonia, but it’s my first in a very long time. The last time I had pneumonia, I was seven. I remember very little of the time leading up to the diagnosis, just that it had something to do with my coat. I hated that coat; it was denim blue with bright red and green and blue patches, and I thought it was very ugly. Worse, it had a zipper that I couldn’t quite work for some reason, and I never managed to get any help from my teachers in zipping the coat up, no matter how cold it was.

So I got pneumonia. I remember, for some reason, not being picked up from school (despite having gone to the nurse) but coming home on the bus, and then my mom taking me immediately to the doctor. I had to stay home from school for a long time, which frustrated me, as I got sick between Thanksgiving and Christmas and missed a lot of prep for our holiday pageants (like I missed the memo that my awesome red and houndstooth dress wouldn’t work for our red uniform for the pageant because it had little clocks on the shoulder, but the teacher just sighed and said, “Well, it’s too late now!” when I came to school in that dress on the day of the pageant).

But it wasn’t wholly bad. The antibiotic I took made me hyperactive, so my parents called it “the jumping medicine.” For some reason, I remember it tasting a lot like cherry jello. I got to watch my favorite show, Reading Rainbow, every day. My beloved Grandma drove up to visit me while I convalesced and brought all sorts of activities to keep me busy until I could go back to school, like a knitting nelly and stained glass ornaments to paint and hang on our tree. 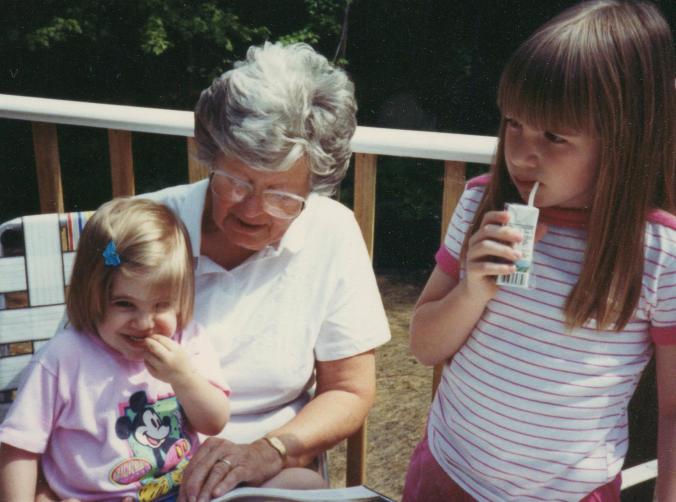 (my sister, said Grandma, and me with a juice box, about six months after the pneumonia happened)

And best of all, the ugly coat got demoted to “snow day” wear when my parents bought me the most beautiful coat ever for Christmas. This new coat zipped up easily, but even better, it was brilliant purple with patches of electric pink and neon green that couldn’t have made me happier if they tried. My parents even got me matching gloves in neon green with the word “Magic!” written on each hand in silver sparkles.

It’s definitely a different experience now. Atypical pneumonia doesn’t come with the cataclysmically high fever and absolute misery as regular pneumonia, but it’s a nasty hell of its own. I can’t spend my days bundled up on the couch, doing nothing but watching daytime television or calm crafts because I’ve got three kids of my own, and one of them is very bouncy and active and one of them tries to eat literally everything he sees and one of them sobs in despair if you make eye contact but don’t pick her up.

Kyle is, thankfully, working from home until Thursday, which gives me a little leeway, but I’m still trying hard to take it easy until my antibiotics really work their magic and I can breathe without so much effort again. Here’s hoping the next time I write, it’ll be something profound and thoughtful and not just “I’m sick, bleh.” Until then…