I am more than just the two of them. Everything they care about is what I am. I am their fury. I am their patience. I am a conversation. I am made of love.

This is the story of Sammy.

I went to see my primary care doctor in March of 2013, at which point Kyle and I had been trying to get pregnant for roughly a year with no success. She’s a fantastic woman, round and soft and more like an aunt than a doctor. If you ever raise a concern, she’ll look into it; if she doesn’t know the answer, she’ll search until she finds it. She looks under unturned stones and around unexplored corners to make sure that she gives you the best possible treatment. As doctors go, she’s one in a million.

(she’s not quite Four, but she’s pretty fantastic. Four for you, Dr. Dilley, you go, Dr. Dilley)

When she found out that I’d been trying to get pregnant without any luck, she immediately set up a referral to another doctor, a doctor whom I later found out was more interested in urology than in obstetrics. This doctor was not very good. She forgot things that I’d told her in the past and snapped at me when I corrected her. Under her guidance, the lab lost Kyle’s test results. She took one look at me, and without even testing me for anything, without having Kyle’s test results, she told me, “You need to lose weight or else you’ll never get pregnant. Lose 30 pounds and you’ll see results.”

The joke was on her, really. I’d just lost 30 pounds. I was primed to lose 30 more, but her words were a slap in the face. Without ever considering anything else about my health, she just decided that I couldn’t get pregnant because I had 30 extra pounds. It remained a constant thread throughout the next several months. No matter the test result, no matter the regularity of my ovulation, I couldn’t get pregnant because I was fat. That’s all there was to it.

Eventually, her nurse stepped in. I call her Giselle the Fantastic, because she is. I was near tears when I called her to try and schedule another appointment, and she looked over my charts. I could almost hear her frowning. “Let me see if I can get her to write you a prescription for clomid. That’s the first step we always take, and if that doesn’t work, I’ll get her to give you a referral to a reproductive endocrinologist.”

I was still near tears, but now they were tears of relief. Giselle went over the possible side effects of clomid (mostly “you may have twins”), and I started my first month after my next period. I was monitored, and I ovulated that month, but no dice. I geared up for another month, prepared myself to be wracked with wild mood swings and acne and bloating and so many other symptoms. I tracked my ovulation as religiously as I had been for months, tackled Kyle when things seemed to be hopping, and prayed for the best.

A week after it seemed I’d ovulated, I noticed I was spotting. My heart sank, but then Giselle the Fantastic called again. “Why don’t we schedule that consult with a reproductive endocrinologist?” she said and mailed me an envelope of information. I received it a day later and enjoyed poring through it. I didn’t know what the future had in store for us, but even though I was sure I was about to get my period, I felt hopeful. Maybe we could finally have answers, finally have a child.

The next day, I bought a bottle of moscato, my favorite wine. Drinks had become a tradition over the last year, my primary solace in the roller coaster of trying to conceive. I’d get my period, feel sad, but then Kyle would take me out for dinner, and I’d get a drink of my choice. The blood orange martini at Uno’s was a favorite, as was the pink punk cosmopolitan at Friday’s. Failing all of those, or if we were in a tight spot, I’d buy a bottle of moscato and enjoy it until it ran dry. I’d placed this month’s bottle in the fridge, ready to crack into it as soon as my period started in earnest.

The next day was Sunday, and Kyle and I were going to meet my parents for lunch, as we always did. I rolled out of bed around 9, early for me in those days of not having kids and not working, and staggered to the bathroom. It was nine days after I’d ovulated. I saw, as I went to sit down, a pregnancy test still sitting around from a month before. On a whim, I opened it, used it, barely expected anything.

And then promptly lost my shit when I saw two pink lines.

From Kyle’s perspective, it was a slow, sleepy Sunday morning. He was making coffee. He heard me get up, heard some crinkling, and then heard a scream and what sounded like a dozen elephants as I charged towards where he stood in the kitchen, pee stick held aloft like the One Ring of Sauron. “I’m pregnant,” I said breathlessly.

The chemical pregnancy I’d had early in our journey had me wary. I spent the week peeing on more tests. The test line got progressively darker; by the end of the week, the tests were disgusting but the lines were beautifully dark pink. Kyle made me throw them away after the first ultrasound. He understood my need for reassurance, but his tolerance for things that have been peed on has limits.

The first ultrasound came after my first appointment with my obstetrician, Dr. Solano (whom I highly recommend for anyone in the central Massachusetts area). He was smiling and friendly, but he also was straightforward. He didn’t beat around the bush or sugarcoat anything, but at the same time, he was very reassuring. Over the next sevenish months, he kept me from losing my mind with terror over every little twinge and shiver.

And he scheduled the first ultrasound when I was nine weeks along. We’d been disappointed so many times that I half expected to see nothing there, not even an empty gestational sac, but delightfully, the opposite was true. Bouncing on the monitor was a definite fetus, with little limbs we could recognize and a big ol’ head. We thought it looked like the chickenhawk from Looney Tunes. It bounced and bounced, alive and with a heartbeat of 179 bpm. It was healthy, a healthy baby, one that we wouldn’t lose. 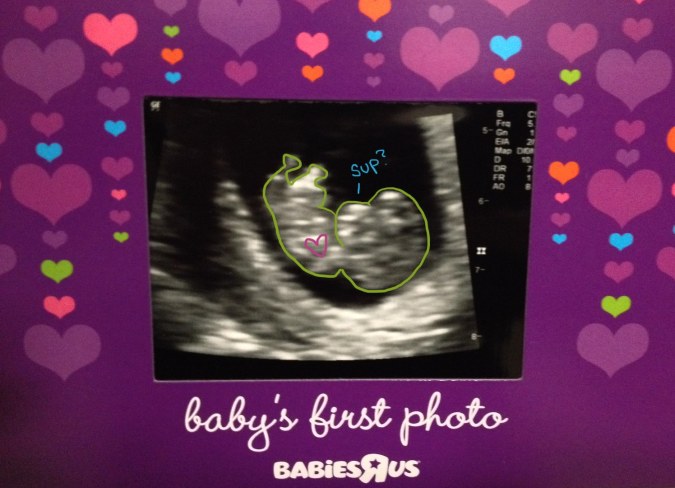 As pregnancies go, mine was mostly uneventful. My tests all came back fine, and the only thing that went wrong happened at the very end of the pregnancy, when everything connected to my liver decided that it was time to rebel. I had a total of three ultrasounds–the initial, dating ultrasound; a nuchal translucency scan at 12 weeks; and the complete anatomy scan at 21 weeks. I relished in feeling Sam moving inside of me, even when I felt like an alien.

(if you’ve never experienced this before, let me assure you that it feels exactly as weird as it looks like it feels)

He stayed put for a good long while, though, and showed no signs of wanting to leave by his due date of May 9. On May 12, I went in for a nonstress test to make sure he was still moving around healthily, along with a routine exam. Dr. Solano was performing an emergency C-section, so I spoke with another doctor, Dr. Nabizdeh (who was also wonderful, but has since moved away). She told me that between my elevated liver enzyme levels, my elevated blood pressure, and my concerns about Sam’s movement, they’d induce me either that day or the next. A couple of hours later, Dr. Solano made the final call and asked me to come in that night for an induction. It was finally time to meet my Sam.