Sam’s been having a rough week. Roughly every night has been punctuated with nightmares, usually about Kyle walking away from him or Kyle not being able to help him with something scary (like falling into a pond). We have these nightmare phases whenever Sam becomes aware of a big change coming up, and there are a LOT of big changes coming up, one of them bigger than the others.

All my life, I’ve imagined having a gaggle of kids (the “gaggle” in my imagination has shrunk to a “few” since getting pregnant is such a pain in the ass). I grew up with two siblings, and my parents have four siblings apiece, so the idea of only childhood is kind of a foreign concept to me, and has been since my sister was born in 1986. Kyle only had one brother, but he, too, couldn’t imagine having just one kid, even though that one kid took a LOT of work to bring into the world and has the energy of roughly five kids combined.

So it was never a question that Sam wouldn’t be our only child, but as our attempts to have more kids took longer and longer, Kyle and I started to wonder about something that never crossed our minds when we’d talked about family size before: how was this huge change going to impact Sam emotionally?

Now, of course, that question wasn’t enough to keep us from charging forward–we’re both oldest siblings, and we turned out pretty okay (most of the time)–but it still gave us pause. Although we know that Sam will eventually adjust to older brotherhood really well, the transition is something that’s worrisome because neither of us really remember how to help him cope with it.

As I mentioned before, I’m the oldest of three. My sister was born several months before my third birthday, so I wasn’t quite old enough to feel established as THE child yet. I don’t remember any strong emotions building up to my sister’s birth; anything I remember from the nineish months leading up to my big sisterhood is completely unrelated to that and more related to things like the awesome green icing on my birthday cake or the hurricane that knocked down the entire woods behind our house.

I don’t even remember anything about when my sister was actually born. Pictures exist of me visiting my mom and sister in the hospital, sitting on a rocking chair and holding her, counting her toes, playing with my mom’s wonderful hospital bed. I don’t remember feeling anything, though; I’m sure I did, but it wasn’t anything strong that my brain decided to store as a memory.

Family lore has it that at some point when my sister was very young, I remarked to my dad, “Daddy, do you remember when it was just you, me, and Mommy? That was best.” This seems to be a pretty common thing for kids becoming big siblings, even if I don’t remember it happening. Kyle’s mom tells the story of him asking, a week after his brother came home from the hospital, “So when does he go back?” My favorite, though, is the story of Kat’s father, who apparently punched his younger brother the day he got back from the hospital.

BUT. I don’t remember this conversation. What I do remember is Christmas. As with every Christmas, we spent a good chunk of the holiday season at my grandparents’ house in New Jersey, along with the rest of my dad’s family. The two years prior, I’d been the star of the show–I was the first (and to that point, only) grandchild, and all of the aunties and uncles fawned over me and played with me and indulged my toddler whims. My grandparents made remarkable gifts just for me (some of which are still in my house, like the enormous toychest my grandfather built when I was two? Ish?), and overall, it was a good time.

But this year was different. I wasn’t the only grandchild anymore. Now there were two new grandkids added to the equation–my sister and my cousin Tim, born about six weeks apart. The attention was, naturally, almost entirely on the new babies–that’s pretty much par for the course at holidays. Any time a new baby or two or three (as was the case on my mom’s side of the family one year) shows up, that’s what everyone wants to talk about.

(as an aside about my mom’s side of the family: by the time I came along, there were four older cousins, and my first younger cousin was born a year after I was, so jealousy wasn’t an issue there)

I remember feeling really sad. I wasn’t angry, not really. There wasn’t anybody to be angry with, because it wasn’t anybody’s fault. I was still the cutest kid in the universe (Sam hadn’t been born yet, you see)… 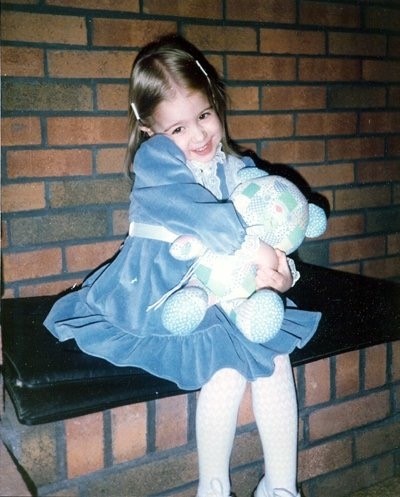 …and I was still lavished with presents. But I felt left out of all the excitement, like I was no longer important to the family as a whole. This isn’t logical, of course, but three-year-olds are hardly known for their feats of logic.

It was my beloved Grandma who eventually noticed that I was sad. This is the two of us in that moment (I’m playing with what I mentally called “mean Santa” because he looked like he wanted to destroy the world rather than bring it joy).

(I sometimes wonder if Sam got any of my genes, but this picture is exactly what he looks like when he’s being serious)

Grandma took me aside and gave me a big hug. She made sure to tell me how very much she loved me and that the presence of my new sister and cousin hadn’t changed that a bit. She told me that I was always going to be special to her, that nothing in the world would ever make her love me less. She took the time out to let me know all of that, and I believed her because that’s what I had been waiting for all along–for her to tell me that I still mattered.

(of course, I’m sure that people told me that from the moment my mom got pregnant with my sister, but this is the instance I remember the most, and also no, I’m not crying, I just have allergies to human emotion)

(but I do miss you, Grandma)

So that’s been the first step of what Kyle and I are trying to do with Sam. I’ve noticed that it works pretty well: on Wednesday, when I got home from work, Sam was acting pretty aloof. He didn’t want to talk to me or give me a hug until I said, “Hey. Dude. I want you to know that even when the new babies get here, you’re still gonna be my guy, okay? I still love you just the same; that’s never going to change.”

And then he tackle hugged me, and we had spaghetti.

(the universal language of reconciliation)

By the time my younger brother came along in 1988, I was an old pro at the sibling thing. I was also five years old, which helped a lot, I think. I remember how I felt when my mom was pregnant with my brother; I knew from the get-go that he was going to be a boy, and I was SUPER EXCITED about that. The day before he was born, I remember dyeing Easter Eggs, and the kit came with a tiny sticker that said “brother.” I held onto that sticker, and when I met him for the first time in the hospital a few days later, I stood on tiptoe and placed the sticker on his swaddling blanket, just so the world would know, this was MY BROTHER.

Probably because of my age, I felt compelled to help a lot more as well. With my sister, I’d been pretty limited in what I could realistically do to help–again, two-year-olds aren’t really known for their childcare skills. As a five-year-old, though, man, what couldn’t I do? I remember helping my mom to give my brother a sponge bath when he was still little enough to have the stump of an umbilical cord (“eww,” I remember thinking, but my mom promised me that the stump would be gone soon). I remember that he cried a lot, and I remember that I could help with that–I’d play music for him from a copper windmill music box we had, and that would help him feel better. I remember feeding him baby food from a bowl, disgusted that he was so eager to eat this mush, but glad to help him do so.

Being a helper was HUGE. It made transitioning from having two siblings to having three siblings a LOT easier on my emotions; I never felt left out or like attention wasn’t on me because I was necessary the entire time. Nobody could get my brother to sleep like I could (so my five-year-old brain thought). I helped and I was needed.

That’s part two of our strategy with Sam, and it also seems to be working to an extent. All of the baby books we’ve bought to explain things to him talk about how he can help with the new babies–playing with them gently, helping give them baths, helping them calm down when they’re sad. I know I’ll be relying on him for even more than that, things like fetching diapers and feeding them and helping with tummy time and who knows what else? He seems to like the idea of being a helper, and we’re trying to involve him even now, letting him choose a few things for the babies… nothing crazy and major, but I think it wouldn’t hurt to have him choose some blankets or this season’s Wubbanubs.

(“What should I buy?” ask first-time moms. “WUBBANUBS!” I roar without letting them finish the sentence)

And, of course, there’s my dad’s brilliant idea: we’ll have two gifts at the hospital for Sammy “from the twins.” The more like Santa Claus he sees them, the better.

It’s a rough transition. I don’t think it could ever be anything but. At the same time, though… I think he’ll be okay. We just need to keep reassuring him that he’s loved and letting him be a helper, and he’ll be okay. Eventually.

One thought on “Big Brother Blues”