Tomorrow is Mother’s Day, and it’s kind of disorienting to me that Mother’s Day this year falls on the fourth anniversary of the day I became a mother.

I remember four years ago on Mother’s Day, I did NOT want to go into labor. I figured, that would be all anyone would talk about: how I’d given birth on Mother’s Day, how I became a mother on Mother’s Day, and that just… it squicked me out. I was still in that place of not knowing how I’d balance motherhood and my own individuality, how motherhood would integrate with the already fully-formed me, so such a twee coincidence was singularly unappealing.

At the same time, though, I was miserable and desperate to be done with pregnancy. I was two days past my due date, and my body had already decided it was Done being pregnant. That last week, I gained 30 lbs in water weight, my blood pressure skyrocketed, and my skin was raw and red from how much it itched due to ICP. I had a recurring pain behind my ribs that I’d later learn was my gallbladder begging my body to kick out the adorable parasite wreaking havoc on my system.

In short: I felt wretched and hated every minute of the last days of being pregnant.

(retrospectively, the fact that I only felt that bad for a couple of days instead of several months was a blessing, but I digress)

And Sam wouldn’t leave! I fully believe he would’ve stayed comfortably tucked beneath my ribs until I passed the 41 week mark, at which point, he would’ve been well above 9 lbs, thus rendering the newborn clothes we had for him beyond completely useless. 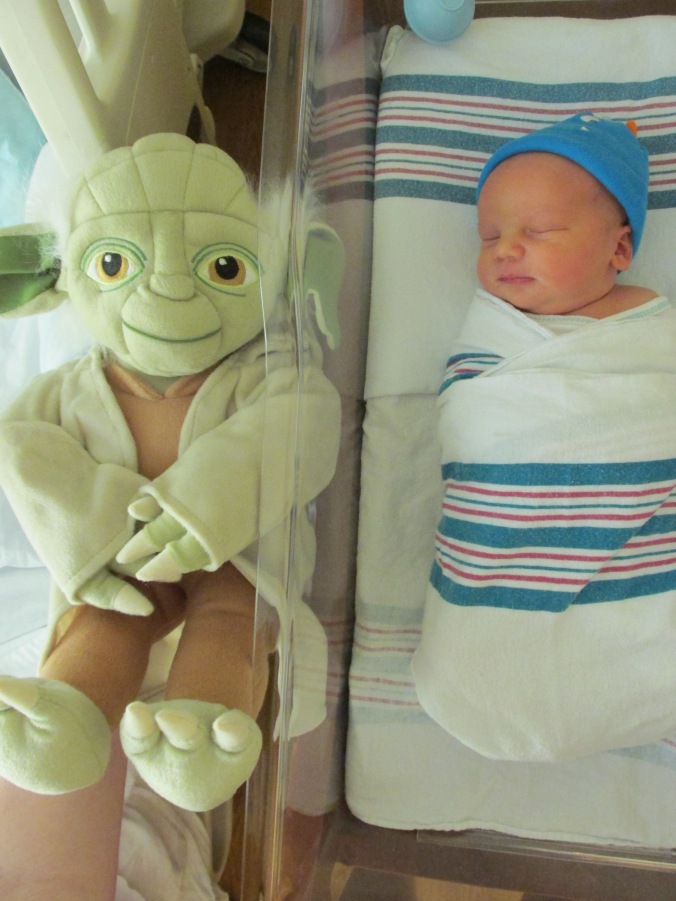 (shown here in the only newborn size hat that ever fit him, looking very much like Isaac currently looks. Yoda for size comparison)

It’s odd how much more difficult things were when he was a newborn, largely because neither Kyle nor I knew what we were doing. We kept doing silly things like trying to sleep through the night while I fumbled through vain attempts to breastfeed. We were both of us exhausted; I don’t know about Kyle, but I have no memory of those early weeks beyond vague impressions of hooking myself up to a breast pump or rolling out of bed so many times in the middle of the night.

This compared to the twins, where we already have our survival strategy in place, where they’re already on a schedule and have been since they were born. You’d think that twins would be harder overall than a single baby, and they probably are if you have to figure out schedules and survival strategies on your own, but since we haven’t, they’re so easy. The only thing that’s difficult is the realization that sometimes, you have to let your baby cry.

(time for a sidebar, folks!)

With Sam, I never let him cry, unless he was crying over a mandatory thing, like a diaper change or a vaccination. At the slightest whimper, I ran to him, picked him up, cuddled him, coddled him, and did everything in my power to soothe him entirely. I sleep trained him a little bit (that is: I didn’t let him cry-it-out, but I did let him cry a little until he fell asleep), but I still had that niggling guilt for not running in and rocking him to sleep every night.

But with twins? That guilt is gone.

Why? Here’s the situation. The twins eat within half an hour of each other because I don’t want to spend 24 hours straight mixing bottles and feeding babies. I like being able to, say, take a couple of minutes to use the toilet or eat a Pop Tart. Or sleep. Anyway, if they’re asleep at the beginning of any given feed, the one who’s being fed second (it’s usually Carrie because she takes a decade to eat) will wake up halfway through the first twin’s feed and start first whimpering, then yelping, then screaming. And when they scream, they SCREAM. Carrie will, at least, tire herself out with the screaming within a relatively short period of time, but Isaac could go on for hours if we let him.

It’s the kind of thing that would get me strung up by my toenails in attachment parenting circles, but y’all, it can’t be helped. I only have so many arms and only such a reach. If one baby is in the middle of eating, it’s not generally considered a wise move to stop completely in order to pop a pacifier in the other baby’s mouth. They just have to wait it out, screaming and crying and all, and yes, it tugs on my heartstrings, but…

We started celebrating Sam’s birthday today with a trip to the Museum of Science in Boston. He’s a space kid–loves the moon, stars, the sun, planets, rockets, everything. He’s fallen in love lately with a Pete the Cat book about Pete going to the moon in a space capsule, and–smart mom that I am–I realized there was a space capsule that you could actually go inside at the Museum of Science. Combine that with the Charles Hayden Planetarium, and I figured I had a pretty good birthday plan for this kiddo.

And we did! The last time Sam went to the Museum of Science, he was a small whelp of barely 20 months. He was mostly interested in running because he’d only just learned how; nothing science-like held his attention for more than a few seconds, even among the brightly-colored objects around the museum. This time, though, he was really into the entire experience. His favorites were the space capsule and the Dora the Explorer science playground…

…and, of course, the planetarium.

The planetarium didn’t catch his attention much at first, but then the tech blew up their image of the sun to be enormous and take up the entire planetarium screen, and Sam just whispered, “Wow!” And then came the Northern Lights and he breathed, “Wow!” And he remained hooked throughout the rest of the presentation, despite overenthusiastic audience members and people trying to come back in and out throughout the presentation (the presenter sounded like she was about to strangle one guy who took his kid out, since she’d only told us we couldn’t keep leaving and coming back about 500 times by that point).

They say that space and dinosaurs are the two gateway drugs for science, and I genuinely hope that’s true and that Sam doesn’t find himself turned off to science by school the way so many people do. I don’t know that I can, in good conscience, encourage him to go for a science degree (when my own student loans are a dark shadow lurking over every financial decision I make), but in the imaginary scenario where I win the lottery and can afford for my kids to have awesome academic experiences without going into debt up to their eyeballs?

I’d like to think that, in that case, I’d have an astronaut for a son.