Sam graduated from pre-K last Friday, which I used to think wasn’t a HUGE deal because, really, must we have graduations for every transition in life? But then he graduated and I was crying the second they started playing “Pomp & Circumstance” (on his principal’s iPhone held up to a microphone, which had everyone falling out laughing). He got the superlative of “the next Luke Skywalker,” which is fair, and had lots of cute pictures with his teacher and with us. 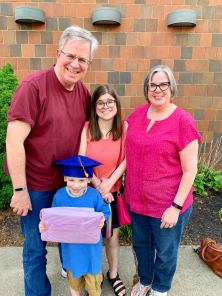 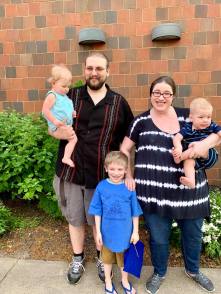 Earlier that day, he’d had his kindergarten screening, which was less to see how good he is at the alphabet and counting and such and more to make sure that his classroom next fall is a good mix of kids. While he was busy playing games that demonstrated his abilities in things like motor skills, concepts, and socialization, I got to sit down and learn all about the kindergarten adventure awaiting us in the fall, for which Sam is most assuredly ready and I am mostly ready.

I say “mostly” because I’m vacillating in how emotional I feel about it. Many days, I think, “Please, someone take this child for the full 8 hours of school, I am exhausted” and many days, I think, “Oh, I hope he’s ready, because we’ve been trying really hard, but there’s so much different about school school compared to preschool.”

Years and years ago, before I had kids, I’d planned to homeschool, less because I think that public schools are a bad influence or because I think that they’re bad overall and more because I wanted to be able to give my kids the individual attention that we probably wouldn’t be able to afford for them to get in a public or even private school setting. That way, if any of my kids were super advanced in any area, we could push them harder; and if any of my kids were having a hard time in any area, we could give them a chance to catch up. And, honestly, I still like a lot of that and would probably be more inclined towards homeschooling them if we were ever in a part of the country or the state where the public schools were less consistently good.

(our tiny town of less than 10,000 people is also a pretty upper class town, by and large, so the public schools are pretty well funded and marked well overall for everything but activities–because the schools have about 14 total people in them–and diversity–for the same reason)

But Sam is such a social kid, and yeah, programs exist for socializing homeschooled kids, but he honestly thrives in a classroom environment, even more than I’d expected he would, and I don’t think I could do him justice teaching him at home.

(the jury is still out on Isaac and Carrie)

It’s going to be a huge adjustment for him, and we’re already seeing his anxiety about that ramp up. He’s having a LOT harder time with bedtime lately, coming downstairs multiple times after being tucked in to ask for, say, a cold drink of water or for another bedtime story or so many varied things. And then once he falls asleep, he keeps waking up in the middle of the night wanting to be cuddled and reassured or, on particularly bad nights, to set up a nest in our room and sleep there until morning (mostly because he’s gotten too big for the bed). Part of me–the part that enjoys uninterrupted evenings–is inclined to scold him for it, but most of me gets that he can’t express his anxiety in better ways, so he just struggles sleeping, and we help him through it as we can.

He probably won’t remember us working through this with him–I mean, my own memories of being five are spotty at best and mostly associated with either being constipated or being at Disney World (at one point, both at the same time, hey!), but I hope that it embeds in his subconscious that Kyle and I are here to help him work through the things he can’t figure out on his own.

Ultimately, that’s what I want for my kids. I don’t want any of them to ever have the feeling of “oh man, my dad/mom’s gonna kill me, I can’t tell them about this!” or “I’ll be in too much trouble if they find out; I have to do this on my own.” If they end up at a party and can’t trust their friends to take them home for whatever reason, even if they weren’t supposed to be there in the first place, I want them to call me for a ride. If they’re really struggling with their classes in school, I want them to ask for help. If they end up either pregnant or getting someone pregnant or with an STD, I want them to talk to me as soon as it happens so that we can work out a plan together.

If they’re queer in any way–homosexual, bisexual, pansexual, asexual, transgender, genderqueer, whatever–I want them to know that they can come out to me without fear and that I’ll always be their fiercest advocate, no matter the political climate or what anyone else thinks.

If their life path takes them in a direction that maybe I don’t agree with but isn’t hurting themselves or anyone else (objectively speaking), I want them to know that I love and support them no matter what, that they will always have a place in my home.

Because they’re my kids, and honestly, it’s the least they deserve.