There’s a weird thing that happens to me after Christmas, as I look at January on my calendars and realize that I have no plans whatsoever. I don’t need to figure out baking specifics and schedule supply runs for specific pay days. I don’t need to make sure the kids have specific outfits at specific times. I don’t need to do much at all in January, and even this year, when I’m looking at a whole bunch of specialist appointments for me and for Isaac (geneticist for Isaac, geneticist and endocrinologist for me), the first couple of months are so calm and nice.

I mean. That won’t last. And it’s mostly just January because the twins turn two in March and then there’s vacations and Easter and Sam’s birthday and basically from March until July 4, I’m going to be screaming like a velociraptor…

…BUT FOR NOW, everything is copacetic!

Christmas was honestly pretty nice and lowkey, despite everything I ended up putting into it (lots of baking, lots of stuff for the kids, lots of everything), and that tends to be the case year after year, and I won’t complain about it. I was utterly spoiled this year, with SO MANY KITCHEN THINGS, ranging from a food processor (I can make pie crust now!) to a gloriously sweary oven mitt… 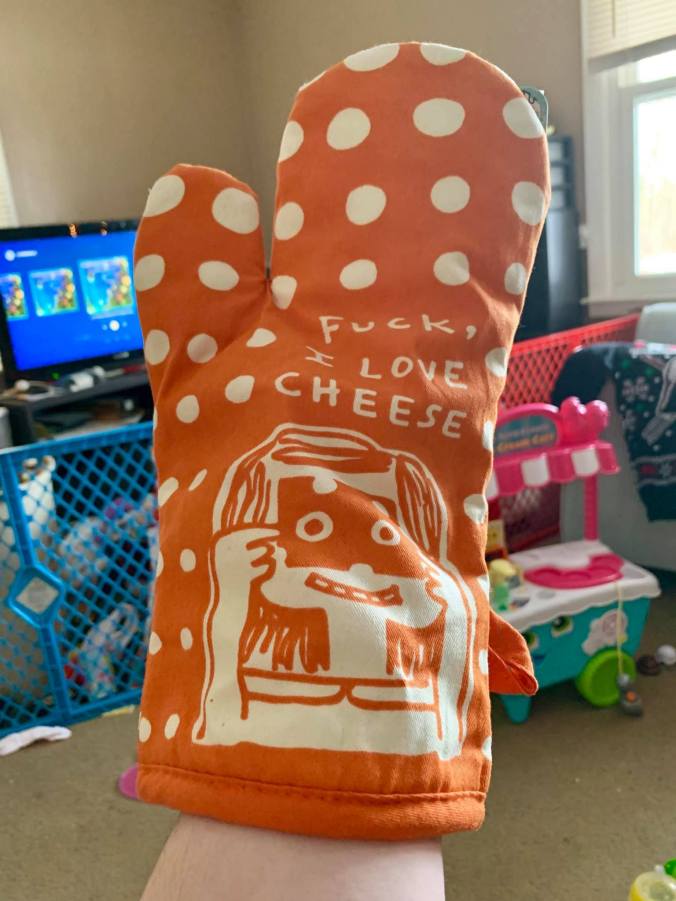 …and then, of course, Kyle added a winter coat and a lovely necklace to the mix, so all-in-all, I feel quite loved and appreciated.

Kyle does as well, but that’s more in spite of me than because of me because GOSH but I hecked up his Christmas.

The initial plan was to get him a nice, new camcorder because he’s always been about video production and editing. He has a degree in it, even! And although we had a camcorder, it was old and didn’t seem to work well, so we never used it and mostly just depended on our phones to commemorate special occasions in 60-second snippets. And that’s fine, but I kept thinking about how nice it was when I was a kid to have longer videos of our family life and how much fun Kyle has when he’s editing videos.

So I ordered the best reviewed camcorder on Amazon, at least in our price range, and did so after talking to him about it, as I have a personal policy on not buying big gadgets for people until after I’ve cleared it with them. Kyle was excited about it, the camera came with all sorts of accessories, and once it arrived, he set to work putting it together and trying it out…

…and found out that it does not, apparently, work with his computer or mine.

We’re not really sure why. It didn’t manage to record ANY video, despite us taking plenty, and connecting it to both of our computers just got a lot of “?????” from all devices. On the plus side, we discovered that our old camera works really well and has a TON of pictures from Sammy’s first birthday stored on it, so we do have a camera in the end. On the minus side, I still have to go and return the damned thing because what the hell even.

And ALSO on the minus side, because I figured the camera would be such a hit (and it would have been if it hadn’t sucked), I kind of got lazy about Kyle’s other Christmas presents. I got him a couch slipcover, with the mindset of “now we can put off getting a new couch for longer without stressing about our couch being disgusting!” because finances or something? I don’t know. I genuinely don’t know what I was thinking, and anyway, it doesn’t matter because the damned thing doesn’t even fit on our couch. It’s big enough, oh yes, but it’s designed for a specific shape of couch and that shape is not our shape.

So I’m 0 for 2, but I didn’t fail entirely. I also got Kyle a beard kit that includes a sheet to keep beard hair from falling in the sink and some beard shaper tools and combs and such, and he liked that a lot. And he liked the things I got him from the twins.

Just. You know. Not from me. Womp womp.

The kids also had great Christmasses, and their gifts have been overall hits. Sam benefited from Minecraft only being $6.99 to put on his Kindle, so even though we’d stuck to our self-imposed limits of four presents from Santa and four from the family (from each of us: Kyle, me, Isaac, and Carrie), we added that to the list, and it’s basically made his life. And it’s been great because even though he’s in love with the game, he’s still been really good about sticking to his screen time limits without getting angry or complaining, so I’m pleased as punch there.

Isaac has been the hardest to shop for because his interests are a bit more complex than “Sam likes MInecraft” or “Carrie likes Elsa.” He likes figuring out the mechanics of various objects–how they work, how to turn them on or off, how to make them do what he wants–and he likes climbing on things. Eventually, once we’ve got off our asses and cleaned up the backyard some, he’ll have plenty of places to climb around, so we mostly focused on puzzles and mechanical toys, which have all been hits to varying degrees. He mostly just seems happy that he’s got a week with both me and Kyle home to play with him, because he’s too sweet for words.

And Carrie, sweet Carrie, has discovered (though not to her disadvantage!) that having narrow and specific interests makes Christmas very easy for people. She received a grand total of three different plush Elsas, all of which she adores (though only one of which is she allowed to bring to bed every night) along with a periwinkle blue “Elsa” cloak that she asks for by adorably saying, “coke! coke!” at us. She is also confused by Kyle having this week off, but is mostly happy about it… though also sometimes prone to tantrums about it if she realizes that, despite there being two parents home, neither is currently paying her All Of The Attention.

So overall: good times. I’m excited right now about having the Christmas-to-New-Year’s Fugue Week to eat all the candy we got for the holiday, return the camcorder and slipcover, and basically just exist without any conscious understanding of the passage of time; and then I’m excited about having January be a much slower month than the last ~3-4 have been in terms of Stuff To Do, because this year is going to be absolutely wild once it picks up steam.

But in the meantime, it’s time to breathe.